Posted in British Politics, Ethics in the Media, Social Commentary 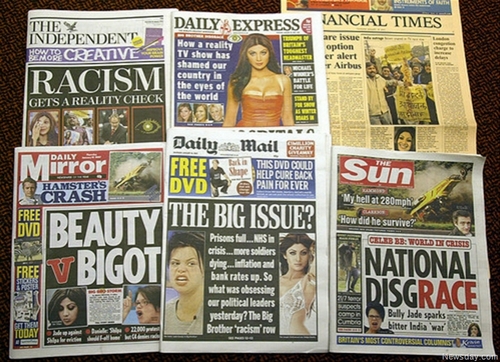 Regular readers of a Blog for all Seasons might expect some coverage of the ongoing Leveson Inquiry. It is, after all, a matter of public interest and there are possibilities for ethical analysis. Unfortunately, it is difficult to be other than cynical in respect of the Leveson Inquiry.

It was established to examine the practices and culture of the British media following assorted exposés of unethical practices. Why a public inquiry when the conclusions seem unavoidable? A cynic might view it as merely a delaying tactic of politicians who are thereby enabled to abstain from action for a time.

There are, of course, cases in which it is only proper that investigations should take place calmly. Where there are conflicts of interest it is often necessary to throw light on them, but such will usually concern the actions of individual government ministers or Members of Parliament and will not have a remit as wide-ranging as that of Leveson.

The announcement of a Leveson inquiry serves to produce positive headlines and to present an impression of action taken just when a government is suffering negative coverage. The ensuing media treatment rarely embarrasses the government and sometimes heads off further negative headlines.

The Inquiry will most likely not reveal much that was hitherto unknown or reach and surprising conclusions. There is regulation already in place to cover unwarranted intrusion into the private affairs of an individual. Could it be that the main purpose of Leveson is to offer prolonged exposure to known unsavoury practices by the media.

Are we to conclude that it is all a waste of time and of public funds? What do we gain by shaming media folk alongside politicians? The public at large holds neither group in high esteem. The goings on in pubic life should, of course, be scrutinised but how does an arrangement like Leveson help? The British media have long had an unenviable reputation for ruthlessness and brutal vulgarity. This has probably served to attract unsavoury characters to such ‘work’.

Would offering some ethical training to those entering upon journalism, or indeed any other profession, be effective? The forming of a good character has surely to take place primarily in the family, assisted up to a point by educational institutions. Public inquiries, recommended best practice and regulation are unlikely to achieve much if that is failing, as it most certainly is in our society.

Leveson offers little more than a soap opera whose plots are already well-known to viewers.