Common and Disparate Elements in the Ethics of Judaism, Christianity and Islam 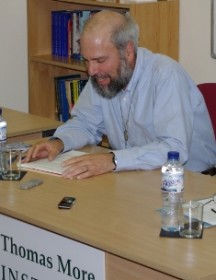 The moral code presented by a religion for its practitioners is produced and influenced by a number of factors, some of which are universal, while others are specific to the particular religion. The potentially universal include, for instance, natural law, the human conscience, and the ‘speaking’ of God in the human soul. Religion-specific ones include (a) any explicit moral norms that the religion teaches; (b) attitudes and modes of behaviour that flow from other aspects of a religion’s teachings, doctrines, or religious practices; (c) cultural history reflected in the religion’s scriptures or mythology;  and (d) the example of the religion’s founder[s]. Until these distinct factors are separated out, it is impossible to identify correctly and understand the fundamental differences, as well as commonalities, in the underlying moral attitudes to be found in Judaism, Christianity, and Islam. Mr. Schoeman will present a framework for performing this analysis and will presume to apply it to the three major monotheistic religions.